It should go without saying that the focus of UML is modeling. However, what that means, exactly, can be an open-ended question. Modeling is a means to capture ideas, relationships, decisions, and requirements in a well-defined notation that can be applied to many different domains. Modeling not only means different things to different people, but also it can use different pieces of UML depending on what you are trying to convey.

In general a UML model is made up of one or more diagrams. A diagram graphically represents things, and the relationships between these things. These things can be representations of real-world objects, pure software constructs, or a description of the behavior. of some other object. It is common for an individual thing to show up on multiple diagrams; each diagram represents a particular interest, or view, of the thing being modeled.

Class diagrams use classes and interfaces to capture details about the entities that make up your system and the static relationships between them. Class diagrams are one of the most commonly used UML diagrams, and they vary in detail from fully fleshed-out and able to generate source code to quick sketches on whiteboards and napkins. Class diagrams are discussed in Chapter 2.

Activity diagrams capture the flow from one behavior. or activity, to the next. They are similar in concept to a classic flowchart, but are much more expressive. Activity diagrams are discussed in Chapter 9.

Timing diagrams are a type of interaction diagram that emphasize detailed timing specifications for messages. They are often used to model real-time systems such as satellite communication or hardware handshaking. They have specific notation to indicate how long a system has to process or respond to messages, and how external interruptions are factored into execution. Timing diagrams are discussed as part of interaction diagrams in Chapter 10.

Use case diagrams capture functional requirements for a system. They provide an implementation-independent view of what a system is supposed to do and allow the modeler to focus on user needs rather than realization details. Use case diagrams are discussed in Chapter 7.

While not strictly part of UML itself, the concept of views of a system helps the modeler choose diagrams that help convey the correct information depending on his goals. Specifically, models are often divided into what is called the 4+1 views of a system. The 4+1 notation represents four distinct views of a system and one overview of how everything fits together. The four views are:

The design view captures the classes, interfaces, and patterns that describe the representation of the problem domain and how the software will be built to address it. The design view almost always uses class diagrams, object diagrams, activity diagrams, composite structure diagrams, and sequence diagrams to convey the design of a system. The design view typically doesn't address how the system will be implemented or executed.

The process view of a system is intended to capture concurrency, performance, and scalability information. Process views often use some form. of interaction diagrams and activity diagrams to show how a system actually behaves at runtime.

The four distinct views of a system are brought together with the final view: 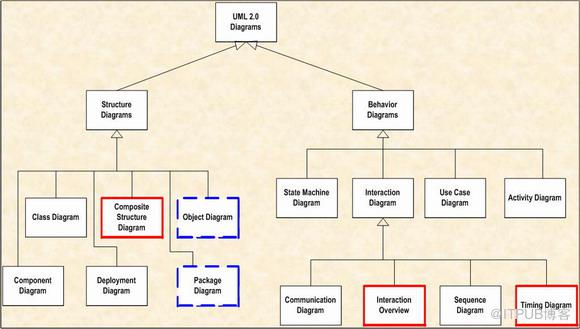